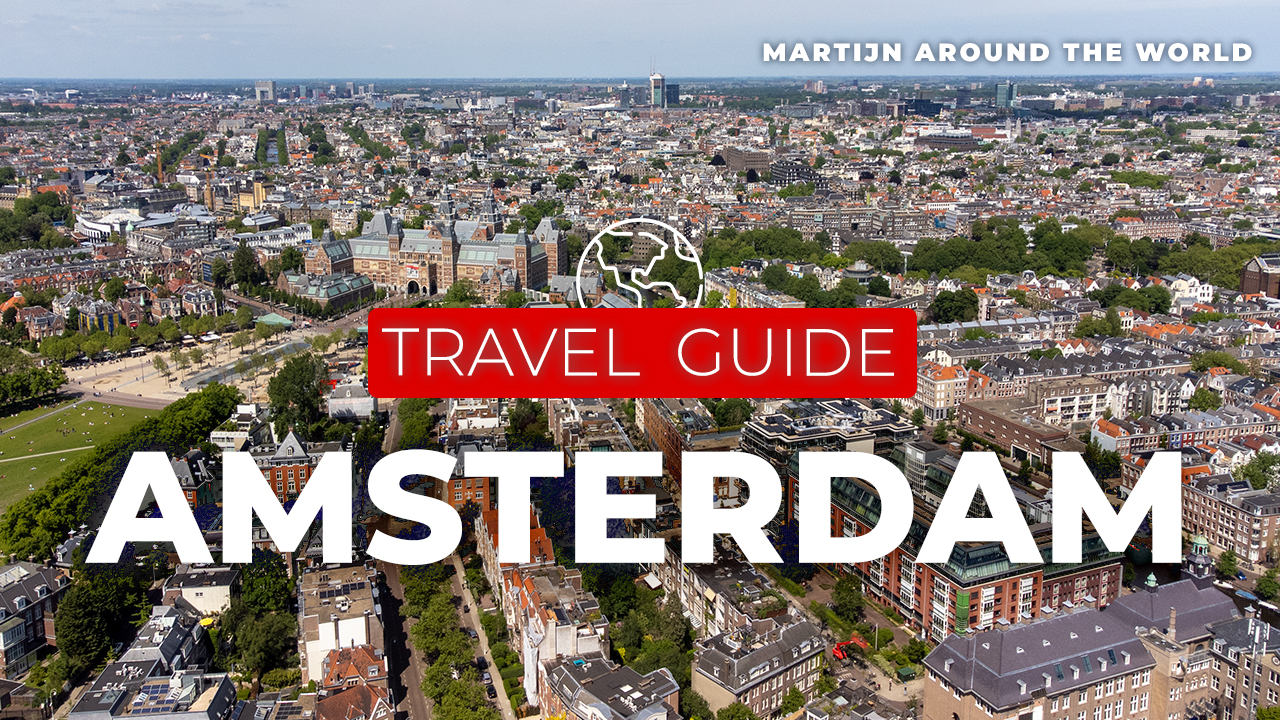 Amsterdam is the capital of the Netherlands. With under a million inhabitants you can not call it a world city. It’s on many bucket lists, because of the coffee shops, red light district, the flowers and canals. In the Amsterdam Travel Guide you get the best Amsterdam Travel Tips to get the most out of your Amsterdam City Trip.

Schiphol Airport – Travel to the city of Amsterdam

The most common way to arrive is at Schiphol airport. For years one of the best airports in the world, because it’s not that big as Paris or London. From here you can take a taxi, or an Uber. The last one is in many cases cheaper! Much more affordable is the train. In 15 minutes and less than 5 euro’s you are in the city center.You can buy your ticket at a kiosk. Be aware that you buy a second class ticket. Something they want to sell you a first class ticket and that is a waste of money.You can arrive at Amsterdam Central station and that is a lovely old building. Be sure that you have your train ticket, to check out after your trip. Otherwise you are not able to leave the station. From the Central Station you can take the local trams or metro to your destination. From Amsterdam Central station you can also to travel to Dutch cities as Utrecht and The Hague or Paris in France.

The Amsterdam city center is not that big, so when you visit Amsterdam for a few days, my advice is to walk. You can start here at the Dam square in the middle of Amsterdam. With the Royal Palace, de nieuwe Kerk (new church) and the 2nd world war memorial monument. You also see a lot of pigeons. Don’t feed the birds, they’re a pest to the city. Don’t forget they may lose their droppings over your head on a flyby. Other famous squares are the “Rembrandtplein” and “Leidseplein”. Both squares are famous for their bars and cafes.

This is where Amsterdam is famous of. The canals and beautiful old houses. We call it “de grachtengordel”. Fun fact: you should try to pronounce that word as a non-Dutchie. It’s been on the UNESCO World Heritage List since 2010. The houses are really old. Therefore we go back to the Dutch Golden Age in the 17th century. When you walk here you can imagine, that Amsterdam is sometimes called the “Venice of the North”.

You can enjoy the city from the water with a Amsterdam canal cruise. You get a different view of the city. It’s worth it! During my trip I made a trip with “Rederij Kooij“. For more information please have a look on their website.

Every year millions of tourists visit Amsterdam to smoke in a Dutch coffee shop. There is a coffee shop here on every corner! The funny thing is that you don’t see many locals there. The government is making new rules to restrict the use of coffee shops for tourists. It’s not sure when this will take effect, but for now you are already informed.

There are bikes everywhere. Look out!

Look out when you cross a street, because Amsterdam is the number 1 bike city in the world. There are cycle paths everywhere. It’s the most common mode of transportation. You can rent a bike by yourself for around 10-12 euro a day.

In the past years the city tried to make more places populair, then only the city center. A good example is the “NDSM Werf”. This is a former shipbuilding site but nowadays the place for the best street art. It’s easy to travel to the wharf. There is a free ferry departing from Central Station.

One of the cutest neighborhoods is “de Pijp”, but in the past it wasn’t. In the 1980s this was a run-down neighborhood. In the 90’s it became popular under the young work class. That changed the neighborhood to a vibrant area with a lot of stores, eateries and still the famous “Albert Cuyp” market. The market is open six days a week. You can buy everything here and it’s mostly cheaper in normal stores.

The Netherlands is home to the most famous painters in the world, for example Van Gogh, en Rembrandt van Rijn. It’s not strange that you can find their work in the museums here in Amsterdam. You have the best options in the “Oud-Zuid” neighborhood. With the famous “Rijksmuseum”,  “het stedelijk” and the “Van Gogh museum”. They are all together in one square, “the Museumplein”. This is also a nice place for a picnic. Nearby you also find the most famous park in the city, the “Vondelpark“. This is really a place to sit or sport between the locals.

This is the oldest part of the city and is called “de Wallen”. With interesting stores, bars and cafes. Maybe you know this place better as the “Red light district”. Keep in mind that prostitution is allowed since 1811 in The Netherlands and it’s legal. It’s a tourist trap. So my advice is come here by night only for a walk.

When you want to shop you have several options. For the exclusive brands you go to the “PC Hoofdstraat”. There is also the “Kalverstraat”, the main shopping street, but not so special. My advice is to go to the “9 streets”. There are 9 streets full with boutique shops. Don’t forget the “Haarlemmerstraat”. A long street with shops, bars and restaurants.

The neighborhood “Jordaan” was built in the early 17th century to house working class and immigrants. Of course this area changed a lot over the years. But it’s still authentic with the beautiful canals, houses, churches and small alleys.The alleys are quite often hidden behind doors. Look carefully around you and with a bit of luck you will find one of these places yourself. The “Jordaan” is also home to the “Anne Frank Huis”. This is the place where young Anne grew up during the second world war until they were deported.When you visit the “Anne Frank Huis” you can feel what life was for Jewish families during the second world war.

During the first lockdown in 2020 Amsterdam was empty. You can say that the city was only full with the local inhabitants. Check the unique images with empty streets in Amsterdam.