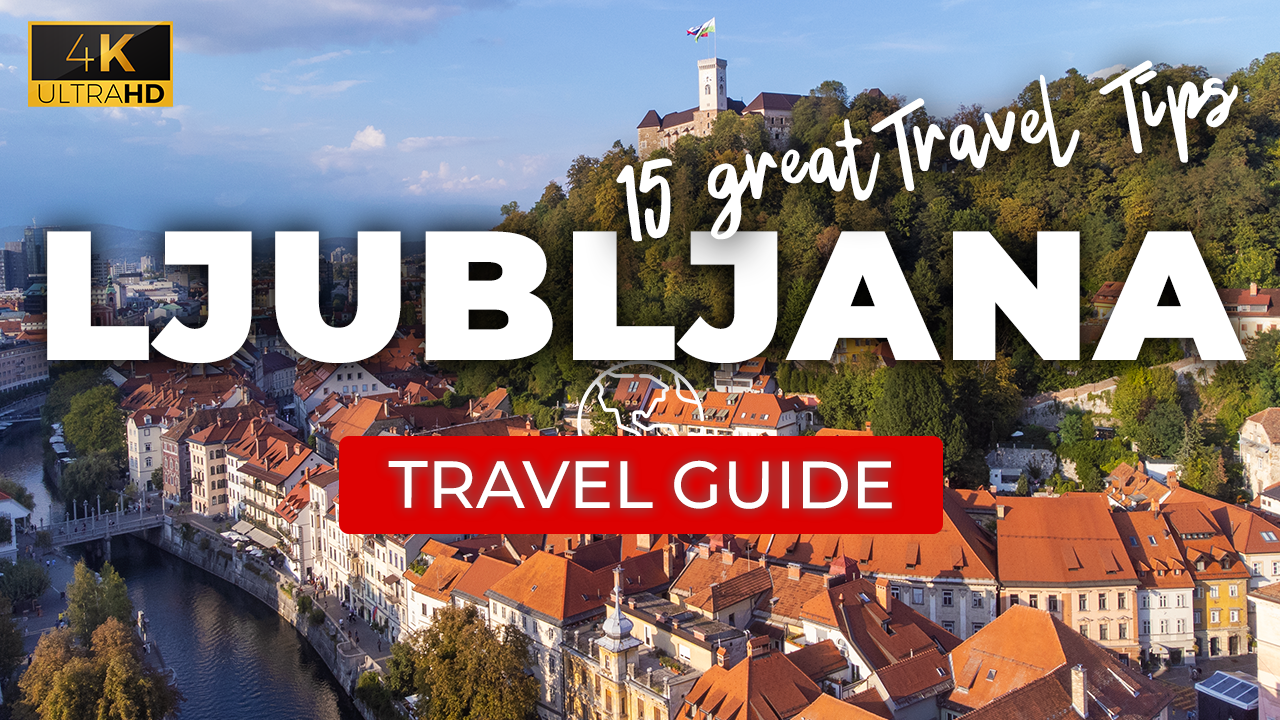 Ljubljana is the capital of Slovenia and home to around 300.000 people. It’s one of the smallest and most environmentally friendly cities in Europe. Get the most out of your trip with the Ljubljana Travel Guide to watch or read.

Travel to the city

The airport is located 30 kilometers outside the city center and to travel to the city you can use a bus service for example.

The journey takes about 30 to 50 minutes and a single ticket costs around 5 euros. Taxis are expensive around 40 euros and when you travel by train there are a lot of direct connections to other big European cities and from the train station its only a 10 minutes walk to the old city center.

One of the landmarks in the city is the Ljubljana Castle. It was built in the 15th century on this hill. It’s 376 meters high.

To go to the top you have some options. The first one is to walk. I takes around 15 to 20 minutes.  Of course you can travel by car or you can take the funicular. A return ticket ticket will set you back around 4 euros.

On top you have a beautiful view of the city of course and you can visit the castle inside.

Some parts are free to go for other parts you need a ticket. And you can easily buy a combination ticket for the funicular and the castle for 13 euros.

And when you have that ticket you can climb to the top of a tower or visit the Museum of Puppetry.

I have to say this Castle is around 900 years old but it looks really new when you compare it to other castles and other European cities but it’s a beautiful viewing point and a nice place to visit when you are here.

Behind the castle there are some paths into the nature so when you like a nice walk it’s a pretty good place to go.

One of the old buildings you certainly have to visit is the Town Hall. In the past it was in Gothic style but a long time ago a part of Slovenia fell into the hands of the Venetians. After that happened the architecture was heavily modified into Italian style.

Nowadays the different styles are harmonious together and you can visit the town hall for free.

The most famous square in the city is the Prešeren square.

The main building on this square is The Franciscan church. It was built between 1646 and 1660 and it replaced an older Church on the same site and the bell towers were built later. Many of the original frescoes were destroyed during a heavy earthquake in 1895 by cracks in the ceiling.

New paintings were made in 1936 and they are really beautiful.

The easiest way  to explore the old center is to walk around over here. It’s beautiful full with colorful houses and these buildings give this part of the city just so much charm and character.

And when you like ice creams then this is your Heaven! There is an ice cream store, don’t ask me why, but on every corner and in the summer I’m here in August  there are some street performances in the evening.

Another way to explore the city is by bike and you can do that  almost free of charge in Ljubljana. There is a bicycle sharing system, which can be used by tourists.

You can rent a a bike for one hour free of charge and when you bring  it back to the docking station and wait for five minutes you can use it another hour. The only fee involved is one euro for one week and three euros for the whole year. You have to pay in advance and you can do that with this link.

The city is split into two parts by the 41 kilometer long Ljubljana River. If you want you can go on the water. There are many companies who offer a boot ride for around 8-10 euros. Most of them only except cash.

… the Triple Bridge next to the Prešeren Square…

…and the Dragon Bridge.

The Dragon bridge was built in 1901 and refers to the symbol of the city. There are four stone dragons, two on each site, that guard the bridge. Further it’s a normal bridge with a lot of traffic.

In the summer (July and August) it can be hot 25 to 30 degrees Celsius.

Once Metelkova was a military site but nowadays the military barracks are no longer recognizable.

This are is fully colored and decorated with art and graffiti  and this area is also known for the great parties by night.

A meeting point also for locals is the Central Market. It’s located next to the Prešeren square.

You can buy a lot of stuff over here or sit down  on the terrace for a cup of coffee.

The market is open Monday till Saturday and on the lower floor you will find the fish market.

A notable landmark in the city is the Cathedral of Saint Nicholas. A perfect place to admire beautiful frescoes artwork and sculptures. With its enormous green dome and twin clock towers it is a must-see. The cathedral’s interior is its biggest draw; nearly every inch of the inside is covered in art from the baroque-style frescos and portraits to the magnificent carved altar and bronze doors.

If you want to escape the hustle and bustle in the city then you go to Tivoli park. It’s the largest park in the city and some of the artworks and buildings are really special for example the Tivoli Castle.

This is also a perfect place for a drink.

There are a lot of nice museums for example the National Museum of Slovenia and a Railway Museum. During my visit I went to the Museum of Modern Art.

You can visit the Museum from Tuesday till Sunday between 10 and 6 and it’s closed on public holidays.

One of the best roof tow bars in town is called “Nebotičnik” and that means Skyscraper. The bar itself isn’t that special but the views are.

From the Terrace, together with a drink, you have  a beautiful view of the city and the castle.

Other great city to visit in Europe is Bremen and Frankfurt in Germany. Get the best travel tips with the Bremen en Frankfurt Travel Guide.

The beautiful Capital of The Netherlands, Amsterdam

One of the most beautiful cities in Europe is the capital of The Netherlands. Famous for the canals and the red light district, but there is so much more. Explore the best things to do in Amsterdam with the Amsterdam Travel Guide.

Other great cities for a visit are :