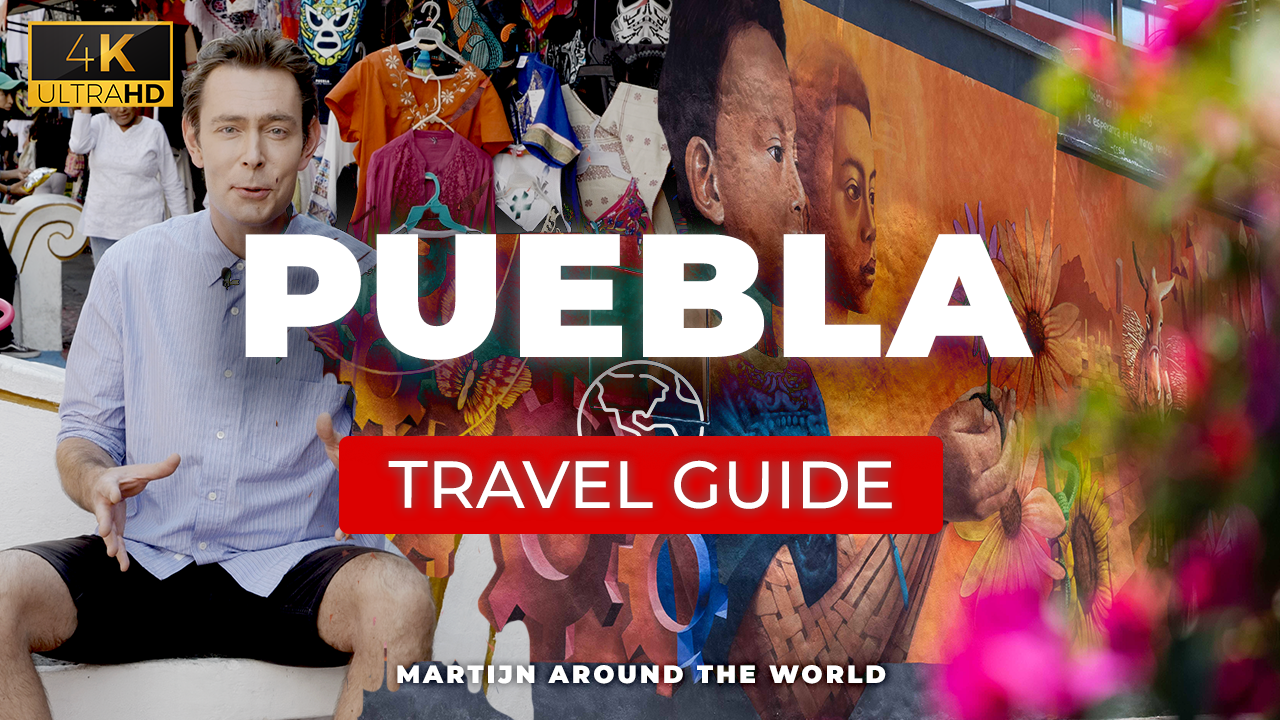 Puebla, Mexico. A perfect city where you can escape from the mass tourism and enjoy the diversity and culture history and culinary specialties and that’s in combination with a huge amount of color.
The city center is home to around 1.4 million people and only two hours from Mexico City. This is the Puebla Travel Guide with the most essential Puebla Travel Tips to read and watch!

The easiest way to travel to Puebla is by taxi from Mexico City airport. A journey takes about 2 hours and costs between 100 and 160 euros. A cheaper way is by public transportation among the locals and you are a little bit longer on the roads. A single journey will set you back 10 to 20 euros.

The first one is the baroque style Iglesia De Santo Domingo.

It was built between 1571 and 1659. The inside is beautiful,  the magnificent “Capilla del Rosario” is located inside the church. A and it was once considered as the eighth of the words – due to the splendid use of gilded stucco and onyx stonework.

And then this big one. La Cathedral Basilica De Puebla. It is considered as the most representative monument of the city.  With two 70 meter high towers and that was a project. The construction of the famous towers of this cathedral took almost two centuries.

When you are abroad you might want to buy some souvenirs for your friends and family. In Puebla you will find the best presents on “Mercado De Parian“.

Next to the market you’ll find “Barrio del Artista“. It’s the artist neighborhood in town, over here are a lot of small art workplaces. It’s really nice to see what the local people create over here.

The main square in the city is called Zócalo the place where the city was founded in 1531. In the past, bull fights used to take place here and performances were given. In addition to the well-known fountain, you will find a town hall, colonial-style houses and many restaurants here.

The city has a long and rich history and a perfect place to dive back in history is “Zona Histórica de los Fuertes“. Over here the battle of Puebla took place in 1862, when the Mexican army defeated the French forces. The French ruled Mexico for three years and this marked independence for the Mexicans.
They still celebrate on the 5th of may, because it is a national holiday over here. My advice is to walk around over here. You can visit also a few museum and see many monuments.

Don’t miss the “Teleférico”. It’s a cablecar with a breathtaking view around the city. A return ticket will set you back 2 euros and 50 cents.

The best time to visit Puebla

The best time to visit the city is from November till April. It’s a dry season so limited rainfall but keep in mind that it can be cold by night. You can check the actual weather.

It’s time to leave the city center, and we go by taxi to Cholula. It’s only 30 minutes ride, and we paid around four to five euro’s for an Uber. Over here you find the biggest pyramid in volume in the world.
This is it!

It can be a little bit disappointing because it isn’t big on the outside because the main part of this pyramid is underground.

They started the construction in the 2th century before Christ, and ended it in the 16th century.
Normally you can visit the tunnels below. But during my visit they are closed.

Besides visiting the pyramids you can also climb this top and visit the church “Iglesia de Nuestra Señora de los Remedios“. It’s a tough climb, keep that in mind. But it’s really worth it and so are the views.

Another attraction in Puebla are the Puente de Bubas tunnels. About 500 years ago there was a STD in town called ‘Bubas’. People who were infected were put away into the tunnels, so they couldn’t infect other people.

Since 2016 the tunnels are open to the public. Don’t be afraid because the std is gone. You are more safe over, here than in a nightclub at the moment. The only thing that you have to survive is the smell. It’s so dirty inside. The attraction is not that big and there’s also a small museum and a rooftop.

The first thing I noticed when I arrived here is the amazing street art in town. If you like street art it is certainly something you want to see with your own eyes. And it’s everywhere in the city center!

You can visit he first public library in The Americas, recognized by Unesco. Biblioteca Palafoxiana which was founded in 1646. It has more than 45.000 books and manuscripts.

One thought on “Puebla Travel Guide and Travel Tips”