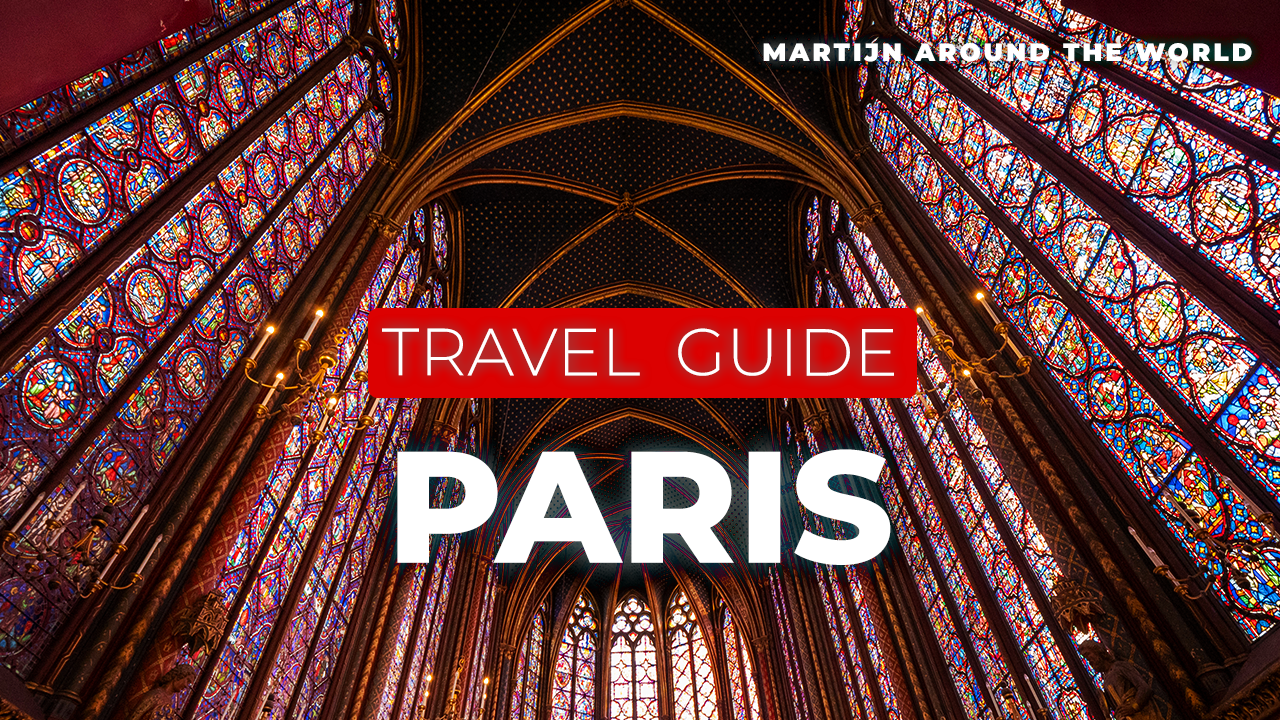 Welcome to the French capitol, Paris. After London, the most visited city in Europe. It’s known as the “City of Light” and the “City of Love”. The streets of Paris are overflow with culture, art, beauty, and history. Paris is a city that captures the hearts of millions ever year. Get the most out of your Paris trip with the Paris Travel Guide with all the Paris Travel Tips you need.

Paris consists of 20 districts and they call them arrondissements. Each district with its own board and own ambiance. Once it started with the first arrondissement and around it they built the rest of the city in the shape of a snail. I have to say it is one of the most beautiful cities in Europe.

Travel to and in Paris

It is super easy to go around by foot, taxi, bike or metro in the city. The metro network is one of the best in the world. You can buy your ticket at machines in the stations for around 2 euros. When you buy 10 tickets at the same time you can safe some money. There are two main airports in Paris, Charles de Gaulle and Orly. You can travel from Charles the Gaulle to the city by taxi. A single journey costs between 50-80 euros. Another way to travel is by train and a ticket costs around 10 euros. Keep in mind that there is often a line at the ticket machines. There is also a busservice from Orly airport to the city. Check the actual price for your flight ticket here.

The big eye-catcher in Paris is the Eiffel Tower. It is 324 meters high and a real landmark in the city. The tower was built for the world fare in 1889. Believe it or not, It was planned a temporary monument. People in Paris protests against it, because it was a useless thing. But nowadays it is still here after 130 years. Don’t forget to visit the Eiffel Tower by night, because it is beautiful illuminated. You can easily book your guide tour to the second level of the tower, with this link.

One of my favorite neighborhoods is Le Marais, in arrondisement number 3. It’s famous for the small streets, the quirky boutiques and the historical spots. It feels like a small city within’ the heart of Paris. At a short distance from here you find the romantic Place des Vosges dating to the Renaissance and this is Paris’s oldest square. This charming oasis of greenery is surrounded by red-brick buildings. There are many treasures to be spotted at every corner as you stroll around this area. Don’t miss this building when you leave Le Marais. It is called the Centre Pompidou. It is an impressive building built in the 1970’s. They idea for this building is to show you the normal parts from the inside, in this building on the outside. There are many exhibits in the Centre Pompidou. To book your ticket you can use this link.

The best-known and largest art museum in Paris is the Louvre. In the Louvre you will find well-known masterpieces such as the Mona Lisa and the Venus de Milo, as well as works by well-known Dutch masters such as Rembrandt and Vermeer. The Louvre is large and offers space for 35,000 works of art. It is virtually impossible to view all the works of art in one day. Therefore, determine in advance which works of art you would like to visit. Check the opening hours and ticket prices with the direct link to the Louvre Museum.

My favorite museum is Musée d’Orsay. It is in an old train station that looks like a palace. In the museum you can watch work by Monet or Van Gogh. The museum houses the largest collection of Impressionist and post-Impressionist paintings in the world. You can check the opening hours and tickets with the direct link to the museum.

The Arc de Triomphe is a triumphal arch and one of the most famous structures in Paris, in the 8th arrondissement. The building is located on Place Charles de Gaulle, still called Place de l’Étoile, one of the busiest thoroughfares in Paris, at the western end of the Champs-Élysées, where twelve avenues converge. During my visit the Arc was wrapped. Before his dead artist Christo had a plan to wrap the Arc de Triomphe. The same he did with the Reichstag in Germany. So it was made after his death.

The Arc de Triomphe was built after Napoleon won an important battle. What a gift that must have been. And this has become also the sacred place for the unknown soldier after the first world war.

One of the most famous street is the Champs-Élysées which dates back to 1640. At that time a line of trees was planted overhere. After that it became an avenue. Nowadays it is famous for the tourist hotspots, the shops and the restaurants. When you want to have your own store here it is quite expensive. 100m2 will costs you around 1 million euros every month. This street is also famous for the finish ride of the Tour de France every summer.

The the biggest and famous cemetery of Paris is Père-Lachaise in arrondisement number 20. This is the burial place for the most famous men and women in Paris. For example: Edith Piaf, Frédéric Chopin and Jim Morrison. You can visit the cemetery daily and there is no entry fee till 6pm.

Paris is also known for the river that flows through the city the Seine. There is an incredible amount of bridges of the Seine river….30!

The newest one is the Pont Neuf. Actually it is the oldest bridge in Paris from 1607. They call it the newest bridge, because this is the only bridge still standing from that period.

There is also a modern part in Paris and it’s called La Défense. It’s a business district many surrounded by towers, headquarters and offices. This is the biggest economic center in Europe. The big eye-catcher overhere is the Grande Arche, a masterpiece from 1989.

In my opinion the months May, June and September. The weather is quite good in that periode and it supposed to be not very hot. Check the current weather in Paris.

Churches and Cathedrals in Paris

Paris is full with churches and cathedrals. So let me show you 3 of them. The first one is the Sainte-Chapelle. This church gives you an amazing experience inside, because there are 1100 hundred stained glass windows from the 13th century. You have to book your tickets in advance!

The second one is a masterpiece of Gothic architecture. Built in the Middle Ages and it is the most visited monument in France. The Notre-Dame. It was built between the 13th and 15th century. Destroyed during the French revolution and rebuilt in the 19th century. I think you know that there was a big fire in 2019. At the moment they are doing the restoration of the church.

Don’t forget this white beauty, the Sacré-Cœur. It is on the highest hill in the city and the church is not that old. It was built in 1920. Overhere you have a great view around Paris.

Don’t forget to take some time to walk around in the neighborhood on the hill near the Sacré-Cœur. It’s called Montmartre. It is one of the most authentic places in Paris. This is the place where a lot artists found their inspiration.

The best places to shop are the boutique shops in Le Marais. In the Opera neighborhood you will find big shops like Lafayette and Printemps. At the rooftop of Printemps you have a good restaurant with a great view around the city. If you want to spend more money or buy exclusive stuff then you have to visit the 1st arrondisement.