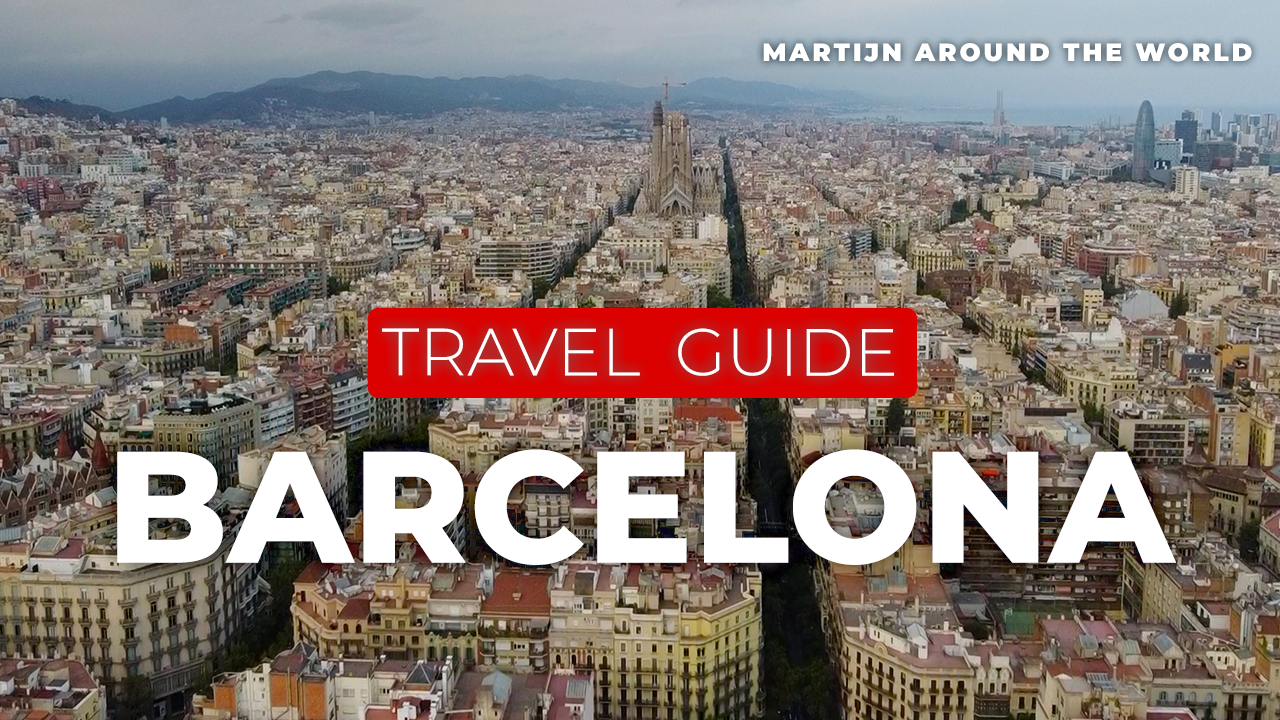 Barcelona, is after Madrid, the second city of Spain located on the mediterranean sea. It’s famous for the art, beaches, food and nightlife. It became one of Europe’s most loved cities after the 1992 olympic games. Get the most out of your Barcelona trip with the Barcelona Travel Guide with all the Barcelona Travel Tips you need.

Travel to and in Barcelona

The main airport in Barcelona is El Prat, with two terminals. Most of the low-cost airlines are using terminal 2. The most common way to travel to the city is by taxi. A single journey costs around 30-40 euros. Another way is the Aerobus. This service brings you for around 6 euros to the city center. The final stop is Plaça de Catalunya. You can buy your tickets in front of the bus. I always use the metro when I travel in the city. The metro network is great and when you buy a 10 journey card, for around 12 euros, you can safe some money.

The beach is also easily accessible by metro. The city invested a lot of money in the metro system for example for the olympics in 1992. There is a “new” line, the yellow line, number 4 with service to the most beach spots.

We start our journey here in the old center of Barcelona. Not long ago it wasn’t the big and famous as it is today. It changed with the construction of the “L’Eixample” neighborhood in the 19th century. Later more about that. The old neighborhoods are El Raval, El Gotic and El Born. Together you call it “Ciutat Vella”.

You see the many Roman excavations in the El Gotic neighborhood that testify to the presence of the Roman people on this place. The city as we know it today was later built on top of the remains from Roman times. The most important building in El Gotic is the cities Cathedral. The funny thing is that some tourists think that this is the Sagrada Familia, but it isn’t and now you are prepared.

In this district you will also find the most famous street in the city “La Rambla” and yes it is very touristic! So if you want to buy some souvenirs for too much money or sit on a terrace between all the other tourists then this is your place, but certainly not mine 😉

A long time ago the El Born district was the economic heart of the city and for centuries, the Basílica de Santa Maria del Mar, has been the heart of El Born. The main attraction in El Born is undoubtedly the Picasso museum, about Pablo Picasso. Keep in mind that it is not possible to make pictures inside the museum.

The last part of the old center is El Raval. For a long time this place was known as dangerous and it was a heaven for junkies and hookers. That was until the 1990’s when the city council decided to improve El Raval.

One of the most famous building is the Sagrada Familia. The construction started in 1882. Now for around 135 years later it is not finished yet. Over here they think that they will finish it in 2026, but they postponed it many times. After finishing the construction this will be the largest church building in the world. The funny thing is that the Egyptians built the pyramids in “only” 20 years and over here they need more than 140 years to finish this church. Don’t forget to book your tickets in advance.

If you want to immerse yourself with Catalan modernism then you have to go to L’Eixample. For me this is one of the nicest neighborhoods in town. It’s full with hip restaurants, beautiful shops and art galleries. This construction of this district changed Barcelona from a small city to a bigger one.

The L’Eixample district can be divided in 2 parts. Left and right with in the middle Passeig de Gràcia. This is one of the most famous streets here in Barcelona and also the most expensive shopping street in Spain. There are also some less expensive stores, so don’t be afraid.

On Passeig de Gràcia you also find Casa Milà. It is considered as a masterpiece by Antoni Gaudí and it is one of the 2 houses he built on this street. The other one is Casa Batlló.

Casa Milà is not only an amazing building but also a museum. Gaudi built Casa Milà for a wealthy man in 1906. This building has been maligned by the locals for years. But nowadays it is the total opposite. People like Casa Milà and it is a real modernist icon. It is still a sad story how Gaudi died. He was hit by a tram in the center of Barcelona. Because he looked unkempt and nobody recognized him, nobody took care about him and he died.

The 3 most famous beaches are La Barceloneta, Vila Olimpica and Poblenou. They are connected with each other, so you can start at La Barceloneta and walk to Poblenou. La Barceloneta is the most famous beach in Barcelona. In the past, like 2 decades ago, it was a quite fishing district, but nowadays it is a tourist beach hotspot. So it is not strange that local residents, how saw there neighborhood change in a short time, are less happy with that.

When you follow the coastline to the north you arrive in Vila Olimpica. The Olympic village. Which was built for the 1992 Olympic games. It’s only a 15 minutes walk. The big eye-catcher here is this golden fish. Over here you also find some night clubs and a casino.

And I another part of the beach is Poblenou. This area had undergone a major renovation before the olympics in 1992. In the years therefore it was well know for the drugs problems and unemployment. Nowadays it is much better. And maybe you are interested because you also find the gay beach here.

Personally I think that Park Güell is a must-see during your Barcelona visit especially when it is your first time here in the city. It is really a masterpiece by Gaudi with a beautiful view around Barcelona and the beach. In the past there was entrance fee for the park but nowadays you have to buy a ticket.

The most easy way to travel to the park is by metro. During my visit I took the green line, number 3 and I left at the Lesseps stop. From here it is only a 15 minutes walk to Park Güell. It’s a little bit hilly, but keep in mind that is good for your health. A personal tip is not to follow your “google maps”, but the signs. When you do that you get the option to use the escalator to the top instead of the stairs.

You can easily combine your visit to park with a visit at the Gràcia neighborhood, it’s just beside the park. Long a go it was a small village bordering Barcelona. But nowadays it is one of the nicest neighborhoods in town, because it is not that full with tourists. Only once a year, in August, it is the opposite, because then there is a street festival. “La festa major de Gracia” is the most important festival in this district. It’s about the participating streets and squares who are in competition for the best decorated street.

A place to impress all your friends and followers with great pictures is the Montjuïc hill. Take the metro to Plaza España, run up the hill… or use for your convenience the escalator. The escalators are perfect, because the hill is 173 meters high. The hill borders Barcelona to the south. Due to it’s perfect location overlooking the sea, this hill has always been a great importance to Barcelona.

When you are here you can also visit the Olympic stadium. The entrance is free, but due to covid it is closed right now. So I can only show you the outside.

A big square you can’t miss in the city is Plaça de Catalunya. It is between La Rambla and Passeig de Gràci (the shopping street). There are a lot of birds here, but don’t feed them! I know this from Amsterdam because sometimes they lose their droppings on your head, during a fly by.