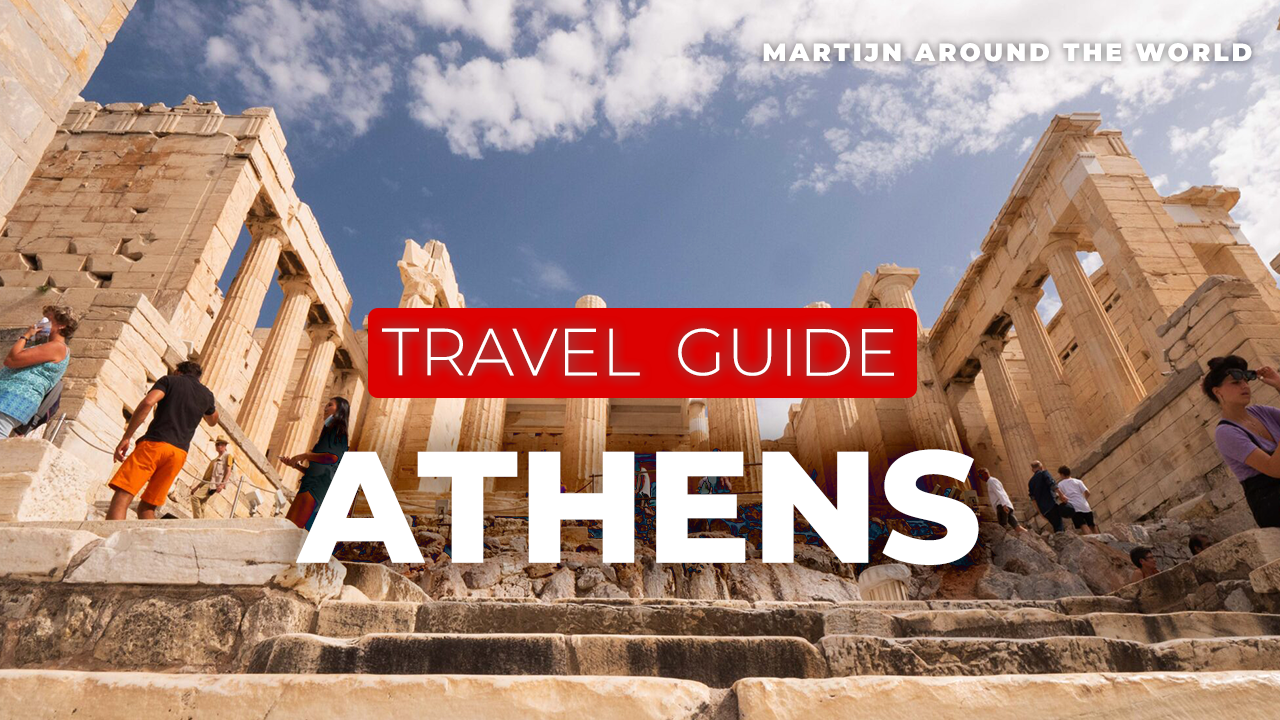 This time I will take you to the capital of Greece, Athens, with the Athens Travel Guide. It is one of the oldest cities in the world. Traces have been found that people lived here, 3500 years before Christ. It is also the cradle of democracy, as we know it today in many countries. It was introduced here 500 years before Christ. Nowadays more than 4 million people live here, which is 1/3 of the population of Greece. Travel to Athens now and get all your Athens Travel Tips to get the most out of your visit.

The hotspot in Athens is the Acropolis. It’s on the spot where Athens originated a long time ago and It is the most important historical monument in the Western world and on the Unesco heritage list. This is where modern civilization, as we know it today, came into being a long time ago. Acropolis literally means “highest point of the city”, but keep in mind that it is not the highest point in Athens. It’s a heavy climb to the top so don’t forget to bring some water on hot days. You can book your tickets online to skip the line.

The largest temple of the Acropolis is the “Parthenon“. They started building 744 years B.C. and the construction eventually took 15 years. That was a big job. I think somebody went through his back, because the marble used here had to come from a place 25 kilometers outside the city. In those days it was just as easy to hire a moving company. The temple is dedicated to the goddess of wisdom “Athena”. It is the same one that gave the city its name. On the south side of the Acropolis you will find the oldest theater in Europe. Use a little empathy, because they’re used to be room for 17,000 people here. In the Acropolis mainly ceremonies took place.

In the Acropolis mainly ceremonies took place. The daily life took place in the “Agora”. Among other things, you had the court and a local market here. You can see it from the Acropolis, but I would definitely recommend a visit to the “Agora”.

Plaka is one of the oldest neighborhoods in the world and it is really charming. On every corner of the street there is a place to eat or drink something and it is almost car free.

This neighborhood is worth a visit and small climb. This district was built in the 19th century by Greeks who came to Athens from a small island to work here. You really get that Greek feeling with those white houses, many cats on the street and a beautiful view.

As you probably know, the Olympic Games originated here in Greece. In 1896 the first modern games were held in this stadium “Panathinaiko“. The stadium built on the original foundations from the year 330 BC. come. The racecourse is a different story. It is not the average 400 meters, but this is only 235 meters on both sides. This means that it may not be used for official matches and to get some money they are receiving tourists. The entry fee is around 5 euro’s. During the Olympic Games in 2004 archery took place here.

To be honest, it’s not the cleanest city I’ve ever been to, but it used to be even worse. They did something about that, because for the Olympic Games of 2004, new metro lines have been built. Did it help? I doubt it. During the construction they did a lot of excavations and these are exhibited in the subway stations. If you want to use public transport then I advise you to buy a card for a few days. This is for 5 days and costs just over 8 euros.

When you are here you will notice that the “Syntagma Squire” is the center of the city after all. Here you will find, among other things, the parliament building and men in uniforms. The “Evezone”. They regularly change guards and on Sunday morning at 11 o’clock they unpack with a big ceremony. This square used to be the garden of the Royal Palace. The royal family also put large buildings around it to be as close to the king as possible. Those buildings are still there and are nowadays used as embassies or hotels.

What I had discovered during the preparation of this trip is that Athens also has beaches. They are not the most beautiful beaches in Greece, but on a hot day it is nice to find some refreshment. I started walking, that’s 8 to 9 kilometers from the center. You can also use public transport to get here. My advice is to open “Google maps” for the very best route. The beaches are completely free and you can also work on your body here.

This is the nicest free point for the best view of the city. However, it is a heavy climb! If you don’t feel like it, a “cable car” goes up every half hour. That will cost you 7,50 euros. Remember 1 thing, that climbing is really rewarded with a phenomenal view over the city. On the top of the hill you can visit the small white church, the “St George” or eat and drink something in the restaurant with perhaps one of the most beautiful views in the world.

Athens is a city full of history, beautiful buildings, but it really has a raw edge. You can clearly see that in the district “Exarchia“. Each building has been given an extra lick of paint here. If you are a big fan of street art or graffiti, I would definitely visit this neighborhood.

This is one of the busiest and oldest neighborhoods of Athens with flea markets, restaurants and beautiful squares. The district is known for its many markets. You have them inside and outside. You can actually get anything. Meat, fish and vegetables.